FedEx tanks on earnings, but charts point to holiday relief rally ahead

FedEx is tumbling after hours following its earnings release.

The stock is down 4 percent after the bell and tracking for its worst month in nearly a decade.

The package-delivery company has plummeted 20 percent in December, a loss not seen since January 2009. Its extreme sell-off has pushed its stock down 33 percent from record highs set at the beginning of the year.

“It actually has a lot of potential,” Maley said on CNBC’s “Trading Nation” on Tuesday. “If you look at the weekly chart, it’s broken below its 200-week moving average. Usually that’s pretty negative for a stock. However, if you look, it’s only done that three times since the financial crisis and in all three of those occasions it bounced back very quickly.”

When FedEx has previously broken below that long-term trendline, it has averaged a 45 percent rally over the following six months, according to Maley’s calculations. 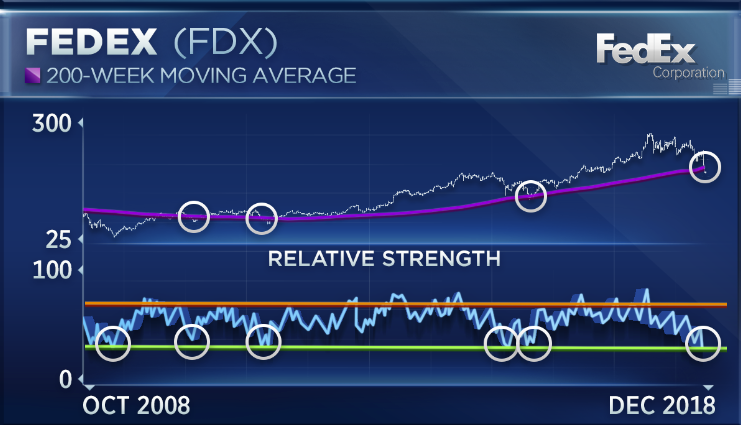 The severity of its recent declines has also set up a strong technical picture, he said.

“Look at its weekly RSI, it’s only been this oversold five other times and each one of those cases, it’s bounced back strongly. The lowest bounce was 25 percent so that’s very positive,” added Maley.

A 25 percent gain would take FedEx shares above $230. It has not traded above that level since the beginning of the month.

Following earnings, Maley added in an email that $180 to $185 should provide solid support for the stock even as it falls. It has not fallen below $180 in just over two years.

Gina Sanchez, CEO of Chantico Global, says some of the damage to FedEx may have been too extreme.

“If you look at what’s been weighing down FedEx recently, it’s been the concern around China and where trade goes from here — obviously that matters to FedEx — but also what happens with Amazon Air,” said Sanchez.

Those risks could be already priced in and might be fading, says Sanchez. On trade, progress is expected in talks with China in the New Year, while Sanchez notes there have been doubts over how well Amazon can efficiently execute on last-mile deliveries.

“At the end of the day, this is an inexpensive stock and it’s definitely been beaten down I think aggressively and I think it’s cheap,” added Sanchez.

Tweets by chanticoglobal
error: This website content is protected!
We use cookies to ensure that we give you the best experience on our website. If you continue to use this site we will assume that you are happy to continue.Ok