Rates are on the rise and giving a scare to stock markets.

The yield on the 10-year Treasury note has risen above 3.2 percent, its highest level since May 2011, while the S&P 500 has fallen nearly 1 percent for the month.

But history suggests higher rates could soon give the stock market a lift, says Ari Wald, head of technical analysis at Oppenheimer.

“Low and rising interest rates are a sign of firming economic growth — good for stocks. High and falling, a sign of peak growth potentially abating, is bad for stocks,” Wald told CNBC’s “Trading Nation ” on Monday.

“When equities are correcting against a backdrop of rising interest rates, we view that as a bull market correction that should be bought,” said Wald. “We saw similar action during the 2013 taper tantrum; we saw that in 2016 ahead of the November 2016 U.S. election.” 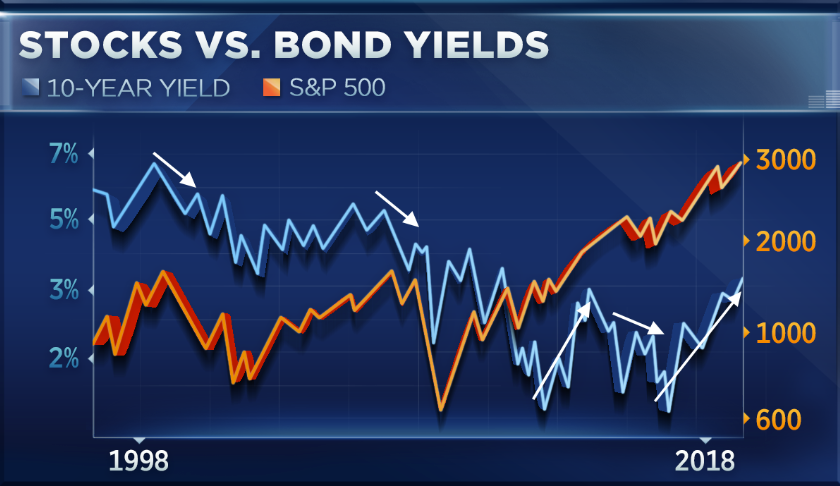 Gina Sanchez, CEO of Chantico Global, does not share Wald’s optimism over the rising rates environment.

“Heads you lose, tails you lose with regard to interest rates,” Sanchez told “Trading Nation” on Monday. “If the interest rate curve stays flat then you’re looking at anemic growth. That’s not good for equities in the long run. If interest rates rise, that means higher interest rate expenses, it means an end to ‘borrow cheap and buy back stocks.’”

A flat yield curve is often seen as a warning sign of an economic slowdown. The curve flattens when the short-term 2-year Treasury yields closer to the longer-term 10-year note. This suggests bond investors are worried about the economic outlook.

A rising 10-year yield has steepened the yield curve since late August lows. However, it remains at a narrow 34 basis points.